Göhmann & Co. KG was founded in Duisburg by Albert Hirschelmann on 1st April 1919 as a technical trading company in the sector of mining and railway requirements. 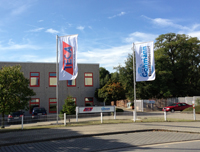 In 1978, the form of the company was changed into a GmbH (similar to a private limited company) and the property situation changed. The company has been family owned since 1991.

Günter Hochstein has played a major role in the company's development. After 50 years with the company he retired from active life, handing over management of the firm to his son, Oliver Hochstein.

Over time the company became a specialist for the delivery of accessories and spare parts for railway wagons and has been a reliable partner across Europe for more than 90 years.

Due to the market requirements on the infrastructural transport connection of the company as well as the impracticality to extend the premises, the company management decided in 2012 to leave the Duisburg location after more than 100 years and to move into new premises in the neighboring town of Moers.

The larger storage area allows us to store the most common products as well as to realise near-term delivery dates even in case of smaller order quantities.